For generations, the heart of South Berwick Village has been Central Square at Main and Portland Streets, a place often just called “the Corner,” where three ancient roads converged from north, south, and east.  By 1805, when the “highway” was straightened and widened, the village had a commercial center, with some shops and farms dating much earlier. 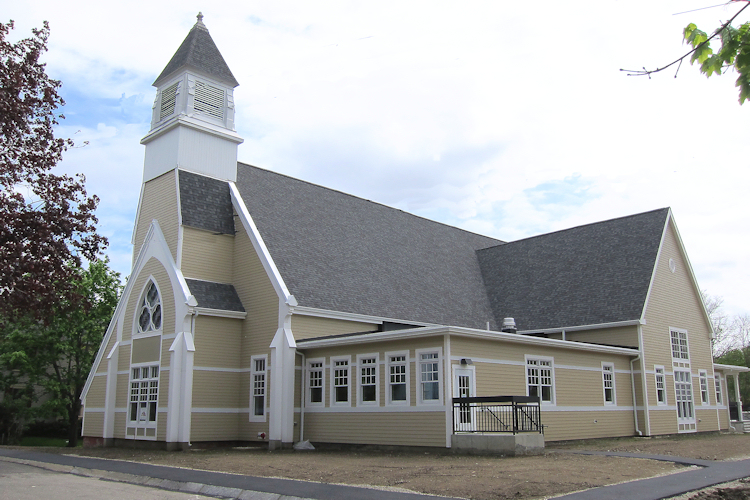 A library has existed in South Berwick for almost 200 years—but not always as the free public library we know today. A “social library” was formed before 1818 by 31 local families who each purchased a share in the library and contributed $1 a year toward the cost of books. The library was open Saturday afternoons and numbered about 250 books—mostly sermons, essays, biographies, poetry, and history, but no children’s books! 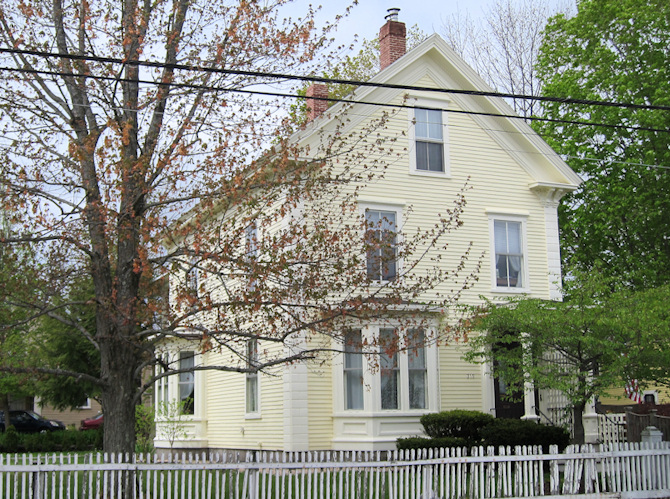 The house at the corner of Main and Young Streets where Rebecca Young lived for 50 years.

Rebecca Young was a close, lifelong friend of Sarah and Mary Jewett. She was born October 31, 1847, two years before Sarah and about four months after Mary. The Young house stood across Main Street from the Jewett property, where Sarah, Mary, and their younger sister, Carrie, were all raised in the 1850s. 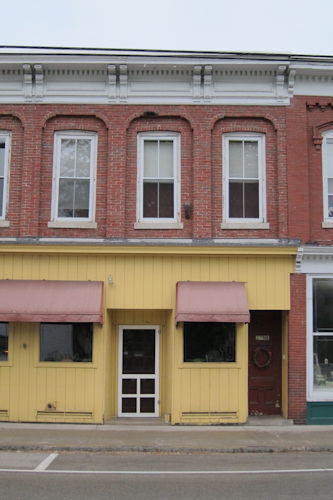 With their awnings and granite hitching posts, the shops of the new business block opened to great fanfare in 1871, on the site where a dozen businesses and homes were destroyed in a fire the summer before. In newspaper ads, the connected row of new stores advertised products “such as to make the mouth water and the eyes glitter,” including tin stoves and leather boots, cornmeal and fine jewelry, ladies’ hats and croup syrup. 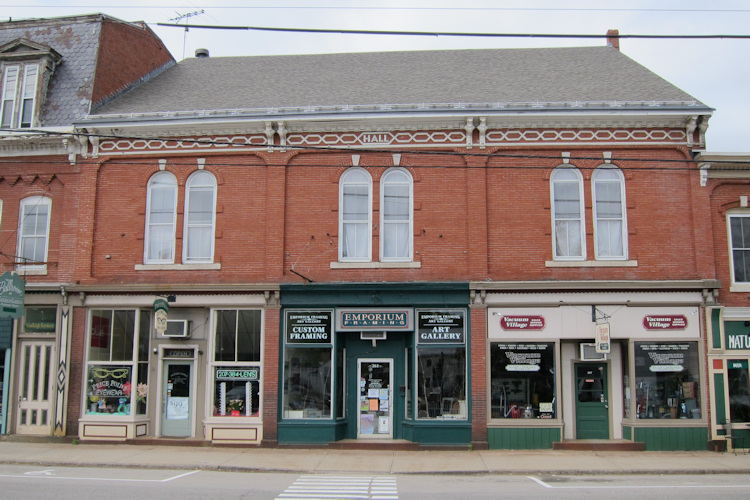 In the South Berwick Village fire of 1870, one of the casualties was a community assembly hall, upstairs in a brick building destroyed in the blaze. “It is with something of a sigh of regret for the past,” wrote Rebecca Young years later, “that we recall the panoramas, the slight of hand matinees, the exhibition of Tom Thumb and Dolly Dutton and their kind, and also the noisy band concerts, and the church levees and fairs of those early days. It was in, or under or near the ante room of this well remembered hall that the fire of the eventful night began, the hall having been used in some capacity during the evening.” 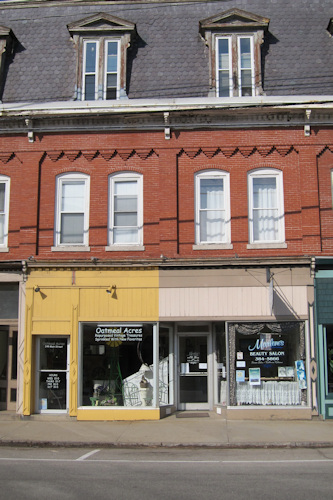 Edward R. McIntire established his hardware business in 1859, according to the History of York County. He lived on Grant Street and operated a shingle mill on a water-powered factory using the creek that today still runs under Lower Main Street .

After the fire of 1870, McIntire opened a new store at 6 Central Square, where three generations of his family operated a hardware business for the next 50 years.  He sold hardware, paints, oils, and garden seeds, as well as stoves and tinware.  A newspaper advertisement from the 1870s boasts that the store provided “all things needed to make one happy, from a clothespin to a mowing machine.” 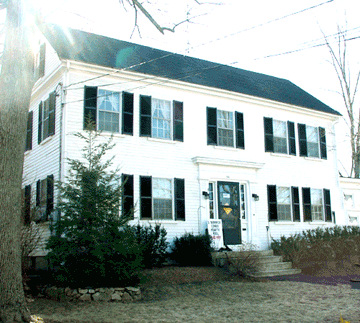 In the mid-1800s, most of the south side of Portland Street was open farmland, owned by the Raynes family living in this house.  Francis Raynes made and sold shoes from a shop near the corner.  Daughter Olive Raynes taught at local schools, likely at Schoolhouse No. 5 farther down Portland Street, where  her father had been on the building committee, and at Berwick Academy.  By the 1850s, however, she ran her own school, first from a room over her father’s shoe business and then, beginning in 1861, from the Raynes farmhouse.  Among her pupils were author Sarah Orne Jewett and her sisters, as well as generations of children from South Berwick’s leading families. 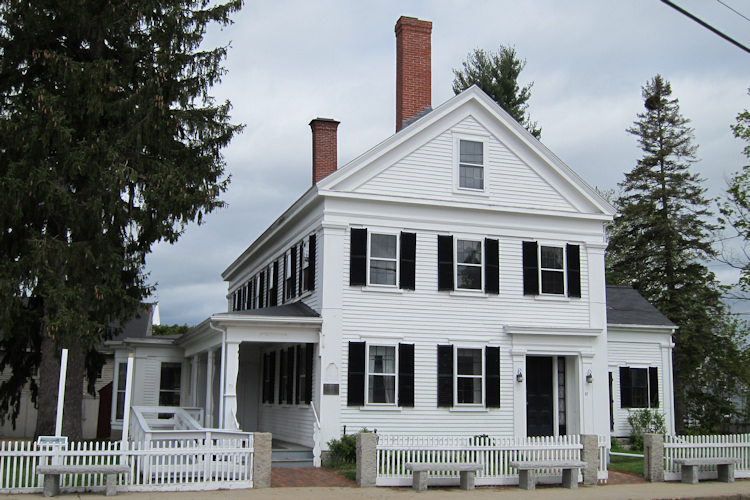 Author Sarah Orne Jewett lived for more than half her life in the Jewett-Eastman House. She wrote over 140 stories, novels and poems during her 33 years here before she returned to the Jewett House, her birthplace next door, in 1887. Her father, Dr. Theodore H. Jewett, built the smaller home for his family in 1854, when Sarah was five.  He was a country doctor who practiced medicine here and inspired some of her literary works. 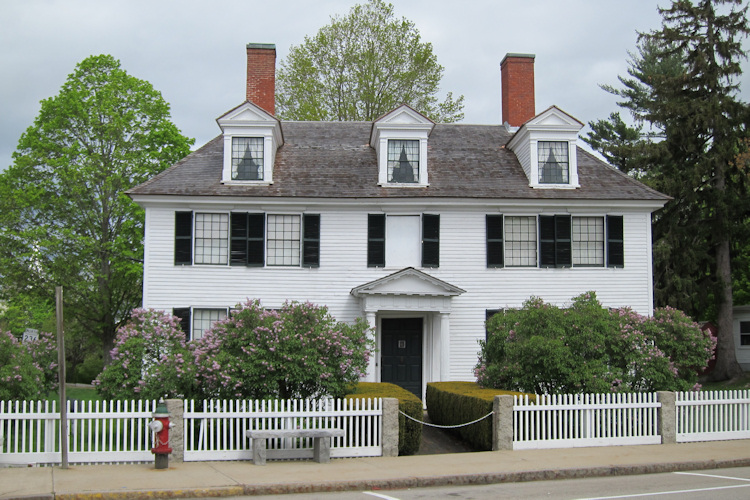 Writer Sarah Orne Jewett is South Berwick’s most famous citizen, known for the stories, poems, and books she wrote while living at the Jewett House and in her childhood home next door.  Sarah’s books tell us all about life in South Berwick and other Maine coastal villages during the time she grew up, 150 years ago. 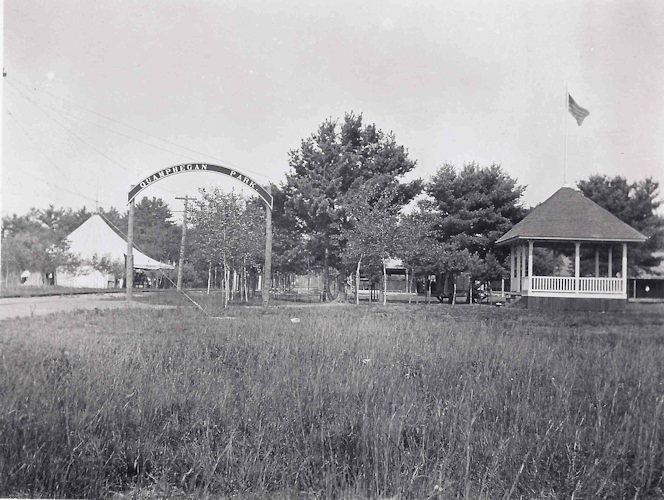 Quamphegan Park EntranceQuamphegan Park was an amusement and recreational park located in the area of what is now Waterside Lane not far from the Route101 bridge on the Salmon Falls River in South Berwick. It was built by the Portsmouth, Dover, and York Railway Company in 1903 to encourage leisure time trolley riders, and it operated until 1923. 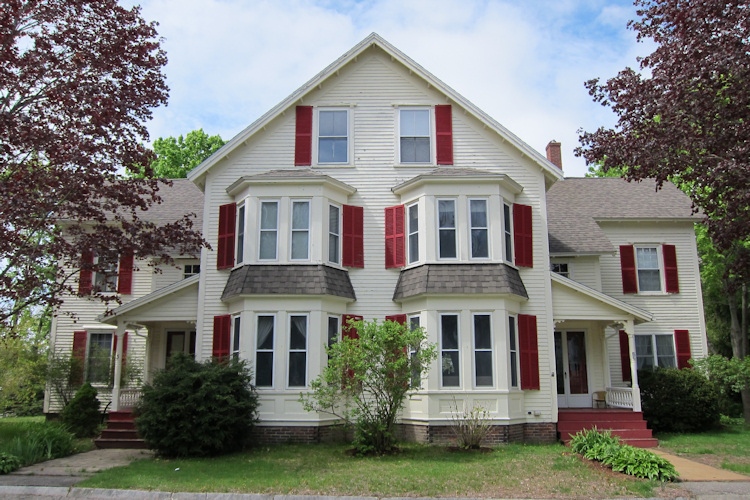 Frank E. Swasey (1862-1936) was born in Massachusetts, but he seems to have grown up on Pond Road, South Berwick, in a house occupied by his father, Charles W. Swasey, who was a railroad engineer.  Frank worked as a shoe trimmer in the nearby Cummings shoe factory.  He also operated Quamphegan Park, the amusement park associated with the trolleys that ran from 1903 to 1923.

A hundred years ago a bustling community known as Happy Valley nestled by the Salmon Falls River, downhill from the “Plains” of South Berwick and closely tied to Salmon Falls Village in Rollinsford, New Hampshire.  Happy Valley was almost a world of its own. 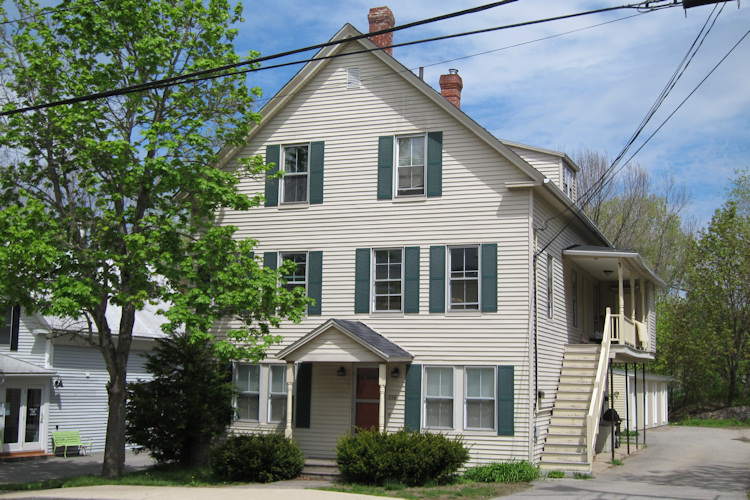 Jules Soucy was 48 years old in 1911 when he emigrated from the parish of St. Alexandre near Kamouraska, a hundred miles northeast of Quebec City along the St. Lawrence River. On the way to Lawrence, Massachusetts, to find work in the cotton mills, he stepped off in Rollinsford and made the decision to stay and work at the Salmon Falls Manufacturing Company. Lower Main Street had been developed in the 1850s after the Boston and Maine Railroad line was built over the Salmon Falls River beside the mills. Jules worked as a Sunday watchman and drove a train that delivered cotton from the warehouse to the mills. 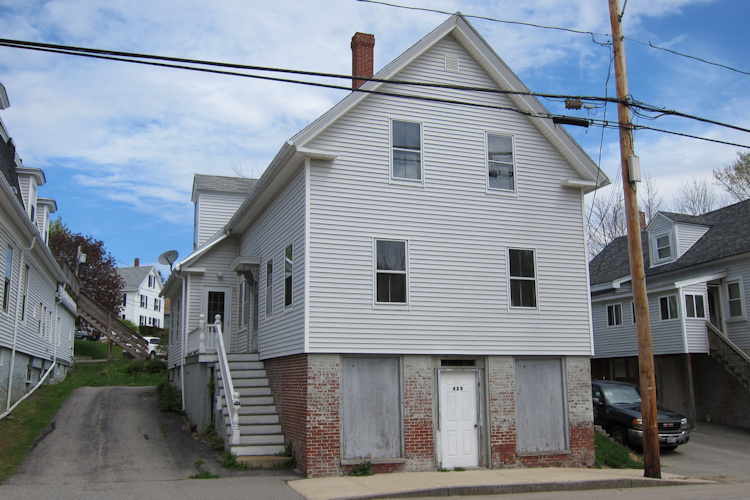 This house was a confectionery or candy store, for nearly 30 years, and it contained a soda fountain into the 1950s.  At the turn of the century the building was owned by Patrick Cauley, who emigrated from Ireland at age 12 in 1862.  He and his wife Bridget moved to Maine in the early 1890s from New Hampshire, where Patrick had worked as a currier and shoe maker in a factory.  He was able to buy the home on Lower Main Street where his family of 7 children lived.  By 1910 Bridget died and all of the children were working in the mills or caring for the family:  Mary, the oldest, was at home; Catherine was married and living with her family of 3 in the same house with her siblings; Jennie was a dresser; Delia was at home, perhaps working in the shop; Jeremiah was in the shoe factory; 16-year-old Elizabeth was a spooler; and 12-year-old William was at home. 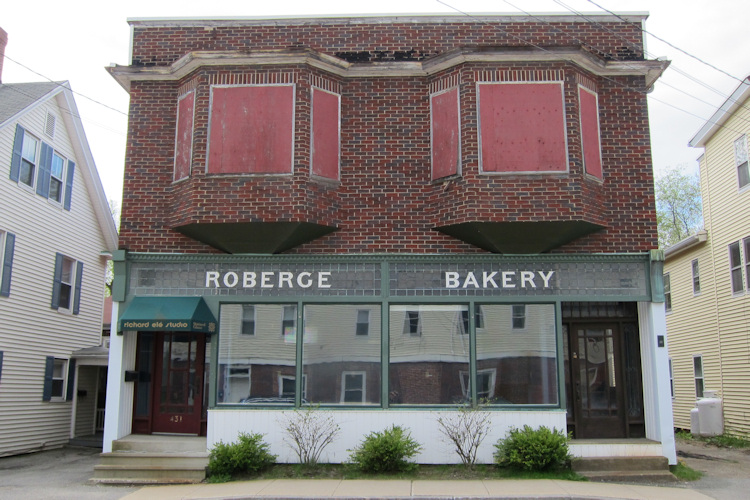 In 1900, Joseph Roberge, baker, advertised his cream bread baked in “Happy Valley, So. Berwick, Me.”   His bakery was located across the street at 430 Main.  In the early 1920s, his nephew Albert Roberge moved the business to this shop, which still contains one of the old ovens. 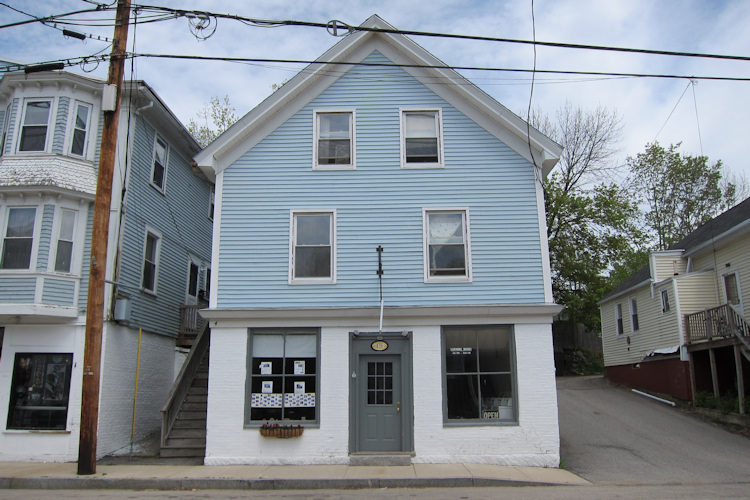 Mary Provensal was born in 1882 and operated a millinery and clothing shop here for over 30 years, starting in 1898, until her death in 1931.  She sold “fancy goods”—dresses, hats, collars, and gloves—as well as sweaters, socks, curtains, and blankets. 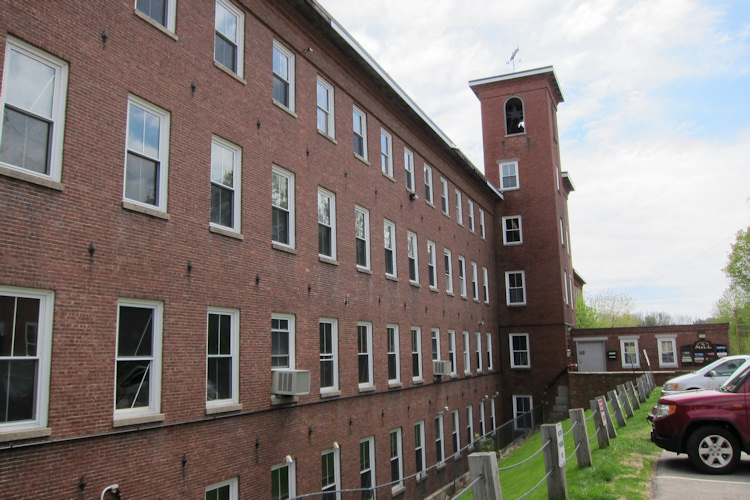 Incorporated by a group of local investors in 1823, the Salmon Falls Manufacturing Company soon began producing woolen cloth.  Within ten years, the mill was weaving nearly 7 percent of all broadcloth in the United States. 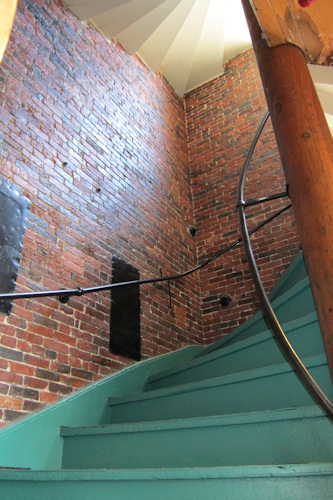 In the early years of the mills, works were primarily young women ages 15-25 who came from farms in the region to work for the support of themselves and their families.  They signed a contract that listed regulations of the mills—from hours of labor to curfew at the boarding houses.  Their lives ere tightly controlled by the ringing of the mill bell, which called them to work in the morning and dismissed them at night. 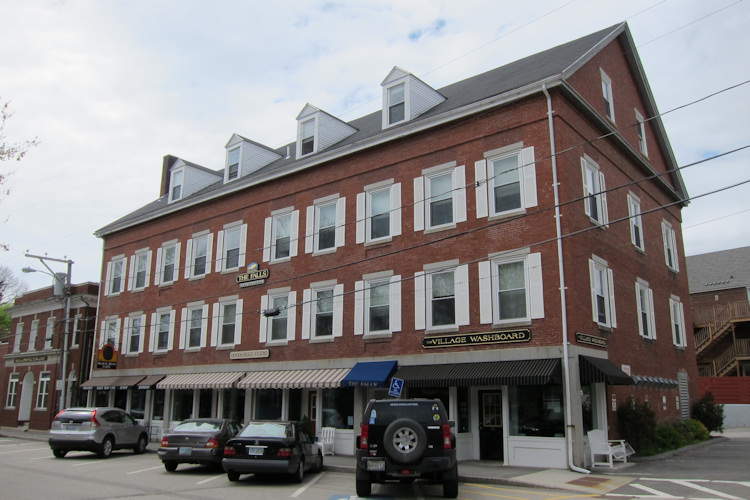 Crossing the bridge into the village of Salmon Falls makes visitors feel that they have stumbled onto a place forgotten by time.  Located in present-day Rollinsford, two brick mills rise above the Salmon Falls River, surrounded by a village of red brick boarding houses and storefronts arranged in orderly rows on the natural hill that rises from the riverbank. Those who choose to inspect it more closely discover that this small village tells an important story of the textile industry in New England, of social status in the nineteenth century, and of how the two intermingled in a planned industrial community. 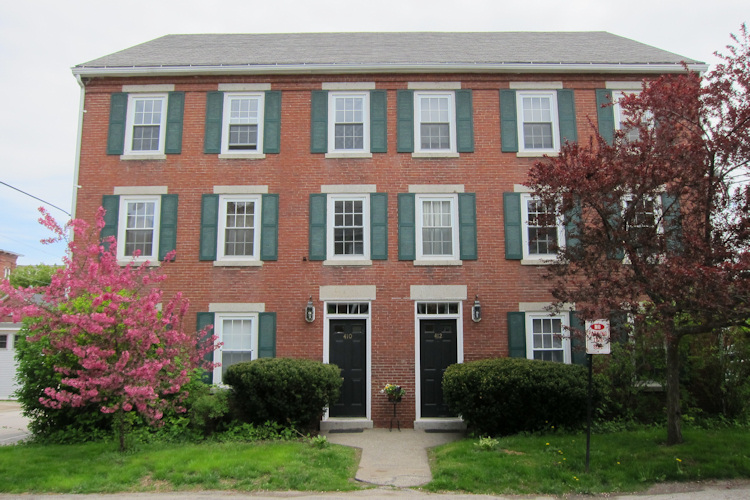 The six identical brick houses ranged along both sides of Second Street were built by the Salmon Falls Manufacturing Company in the 1840s to house mill workers.  Each of the houses was three and a half stories tall, with twenty-four rooms to house single workers, many of them young women coming from farms.